We are captivated by things that fail in a spectacular way. The recent premature launch of a massive fireworks display in San Diego has garnered worldwide attention. Besides being a catastrophic failure, the 15-second discharge of thousands of explosives was immensely loud and strikingly brilliant, all good for 15 seconds of fame on the Internet. Fortunately, so far as I can determine, there were no physical injuries, but one can imagine the great disappointment to hundreds of thousands of spectators who had made the trek to be in position for the big show, not to mention the angst on the part of organizers. That incident represents a ne plus ultra of the potential failure that fills the nightmares of anyone in the live event business: an unrecoverable, show-stopping calamity. The San Diego show website attributes the problem to “a technical glitch” (quotation marks are theirs). A “glitch,” indeed.

Having just completed the production of general sessions for the CSC Technology and Business Solutions Conference in New Orleans, the subject of the persistent, intense effort to run a glitch-free event is fresh in my mind. In five general sessions over three days, the expert team from Epic Production Technologies ran a smooth, successful event in which the presenters, panel discussions and their content were the stars — NOT any failures of hardware, software, lighting, audio or any of the thousand tiny details required to deliver an effective convention. 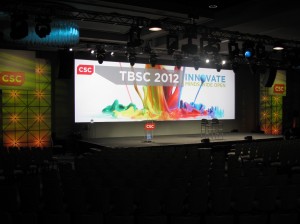 It’s not that NOTHING went wrong, but nothing catastrophic occurred, and any errors occurred behind the scenes and out of view of the audience. There are plenty of catastrophes waiting at any show that has four semi-loads of gear, including tons of lighting and audio equipment hanging on trusses above the audience. 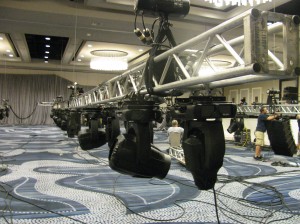 Safety first, of course, is the first rule. Those trusses are overengineered for the load they carry, as is the rigging that suspends them. The fire marshal has approved the seating plan to provide for an emergency evacuation, and so it goes, right through every aspect of the show.

My concern on any show lies primarily with the “soft” aspects: the media, presentation graphics, scripts and the way they fit together to run from the opening video to the final walk-out music. I prepare a “showbook” from which the technical director and the lighting, audio, graphics and video departments develop their cues. Once we go live, almost anything can go wrong; a projector could fail, a circuit board in a video router could blow out, a graphics computer could go down. Almost everything is redundant, though, so there’s at least one backup in all those cases. Harder to recover is human error, a missed lighting cue, a video that doesn’t hit the screen precisely when programmed, or a speaker who fails to come to the stage. That’s why there’s a script, multiple rehearsals, and world-class people pushing all the buttons.

An unrecoverable error on the scale the pyrotechnicians experienced in San Diego this week is almost unimaginable, but  it could happen. That’s why everyone is focused on each cue, every piece of hardware and software, every safety chain on every lighting instrument. We prepare for every imaginable failure. One can’t prepare for the unthinkable.

It’s interesting that as I was preparing this article, I read this piece on Chris Brogan’s blog about dealing with technical difficulties. He makes the excellent point that taking responsibility is the necessary first step when one is confronted with technical failure: it may not have been one’s fault, but it is one’s responsibility to address it, and do whatever is necessary to fix it. On any live event, large or small, one wants to have a staff who takes that notion of responsibility to heart.

Many of the crew who were with me on this event spend a good deal of their time touring the world with large arena performances by some of the biggest pop acts in the business. Those shows involve mammoth rigs of lighting, audio, motorized stage parts, and thousands upon thousands of lighting and media cues. One would think that this relatively tame corporate show of mine would be a piece of cake, a walk in the park, a snoozefest for them; not so.

As one of the lighting directors once told me, “On those big arena shows, we have thousands of lighting cues. The audience is going crazy, things are flying around and lighting up all over the place. If we miss a cue or two, there’s so much going on that no one even notices. On your corporate shows, if we miss one cue, it might be the entrance of the CEO or a video roll-in, and it’s the ONLY thing happening: a thousand people in the audience are looking right at it, waiting for it to happen, and they know immediately that something’s wrong. That’s why we like doing these events, because the pressure is really on to perform.”

And it’s why event producers age at a rapid rate. Have a great road show experience about recovering from a near-disaster? I’d love to hear about it.